We last spoke about Bitcoin in 2013: “We would classify them as an interesting fad, Bitcoins are structurally flawed but an alternative online non-governmental currency may well endure”.

Well they have certainly endured, and if the price of them is the thing that matters, then they have flourished. They have shrugged off the volatility, the security issues, the technical limitations and have now been endorsed by the one-time richest man in the world (Elon Musk) and even financial institutions are considering them with a straight face as portfolio diversifiers. So it is time we had a recap and review what has changed and whether we should be changing our mind. 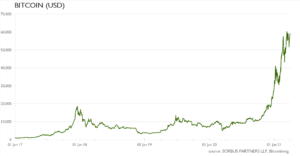 Once more, but with feeling…

Bitcoin is hard to understand because it is both a payment technology and a financial asset.

Bitcoin is “mined” by computers running a specific programme or algorithm. The purpose of this programme is to maintain a digital ledger of ownership of bitcoins and transactions. This is called a “blockchain” – the payment technology. While this ledger may be digital and not paper based it still takes time, money and energy to maintain. In order to encourage people to undertake this “mining” and maintain the ledger the algorithm will, as we discuss, occasionally produce a bitcoin for the miner – this is the financial asset that can be bought and sold.

There are a finite number of bitcoins that can ever be produced, 21 million to be precise, of which 18.6m have been mined to date.

A solitary new bitcoin is minted every ten minutes. It is awarded to whichever computer first solves a mathematical puzzle that is automatically generated by the software. As more and more people have started mining you might expect the solution to be found quicker, but the software is designed to scale the complexity of the puzzle being solved in order to ensure that the puzzle is cracked only every ten minutes. While the time taken to produce a bitcoin does not change the computing power to produce it does.

Huge “mining” farms have been established around the world to industrialise this process often in cold locations to eliminate some of the costs of cooling the servers. The steepling price of bitcoin has dragged an ever growing amount of computational resource into mining bitcoin, driving up the energy consumed by every bitcoin produced. The energy costs might be rising but as long as the price of bitcoin is higher than the costs of mining it, it will continue to drive in new and bigger computers.

For context, bitcoin now consumes more energy in a year than Argentina or about one third of the total energy use of the UK. There is clearly a growing environmental problem with bitcoin. [Source: U.S. Energy Information Administration country data]

So let’s simplify the problem and do some “via negativa” – trying to work our way to the right answer by eliminating answers that we can show to be false.

1) Is there value in Blockchain?

The fact that bitcoin uses a blockchain, which is an innovative digital ledger, is irrelevant. It may be creative but there is no intellectual property to defend against others using blockchains. There is no value to bitcoin in broader take up of blockchain and indeed bitcoin has no corporate body or entity to seek to monetise the technology.

As it happens the form of blockchain bitcoin uses has already been improved by others. Blockchain – a permanent digital ledger – clearly has applications. The difficulty is that recording the transactions is so expensive: bitcoin transaction fees are over $15 and if you include energy costs then each transaction costs nearly $70. These costs do not eliminate the value of blockchain entirely, but they do suggest that it is limited to low frequency, high value transaction registers. It must surely only be a matter of time before the UK Land Registry adopts blockchain even if only as a digital failsafe or back up. Similarly a register of high value art, classic cars, wine (etc.) transactions and ownership could be effective.

So while blockchains have some utility, there is no read across to the value of Bitcoin.

2) Could it be used as a default transaction currency?

No. The transaction costs are a fundamental barrier, but they are not alone. The volatility of bitcoin mitigates against it as well; you can’t rely on using a currency that soars and plunges in value. There are also significant storage and fraud issues and these are only going to increase as the value of bitcoins increase.

Much as you place paper currency in your wallet you place bitcoin in a digital wallet. But this wallet has the same sort of security that Arizona bank’s had when John Dillinger and his gang were in town. There have been numerous instances of online digital wallets being hacked and as the currency is anonymous or “bearer” (like with a £5 note – your name is not attached to it) then you are vulnerable. You might also choose to reflect on the answer Dillinger gave to being asked “Why do you rob banks?”

“Because that’s where the money is.”

The soaring price, anonymity and ease of fraud make bitcoin a hackers dream. We have no data to support this contention but we would be surprised if digital criminals were engaged in any other form of activity right now when the pickings are so rich with bitcoin. 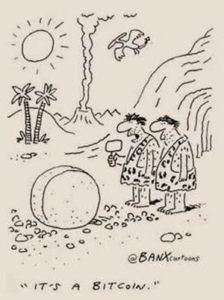 In order to deter the digital pirates many chose a “cold” wallet to store their bitcoin  – one that is offline. This protects you from online hackers but is no protection against theft, computer failure, loss of passwords or access keys. You may have read about the poor man from Aberystwyth who threw away the wrong hard drive that now resides at the bottom of a rubbish tip with its £50m of bitcoin stuck inside. Even offline is not without its risks.

Buying, holding, selling, bitcoin is complex – this is not something that is easy to fix. The world went through dematerialisation – when share certificates were given up in favour of digital nominee holdings – and transaction speeds increased at the same time as costs plummeted. This is not the trajectory for bitcoin – the structural limitations are fundamental.

3) Is it an inflation hedge / does it protect against central banks and quantitative easing?

This is harder to answer. One of the key attributes of Bitcoin is scarcity, the programme ceases issuing after 21m Bitcoin are mined, and scarcity is attractive. It is why the rarity of a stamp defines its value, and why prints of artworks are worth less than originals. The Ferrari 250 GTO is a pretty car, but there are arguably prettier and certainly faster sports cars out there. The reason it is so valuable is because it has the prettiness and the heritage plus scarcity; only 36 were made.

The impact of central banks flooding the system with liquidity has not led to inflation. Yet. That is the key word. Cryptocurrency advocates believe that the consequence of quantitative easing will be inflation and that holding an asset that cannot inflate (i.e.: no more of it can be made) provides some protection.

The advent of Bitcoin post-dated the last bout of inflation so there is no evidence to rely on but it seems plausible that Bitcoin would provide a good hedge against inflation all things considered.

So: if Bitcoin has no value from blockchain and no prospect of being a transaction currency and in the absence of inflation it has little attraction, then why is its price soaring?

Part of it is the same reason why RobinHood is booming (see “Machines of loving grace” Jun 19, 2020) and why the price of Tesla has soared (see “Tesla the madness of cars” Sep 4, 2020). There are clear speculative pressures, particularly in the US, fuelled by federal cheques and an absence of gambling opportunities. There are squadrons of Twitter and Tiktok experts extolling the virtues of Bitcoin and now even Investment banks are forecasting the future price movement of it.

Elon Musk, the founder and “Technoking” of Tesla has invested $1.5bn of Tesla cash into Bitcoin. It is one of the signs of our age that Tesla – a company whose market capitalisation peaked at just short of $1 trillion – has made more profit from this investment in Bitcoin than it has in its entire history making cars.

Bitcoin could even go higher. Much higher. If institutional money (the largest investment houses and pension funds etc.) decided to buy Bitcoin its price would balloon from here. The justification for buying Bitcoin as an asset or as a portfolio diversifier is that it has uncorrelated returns from other asset classes.

To make our position on this quite clear, the arguments proposing Bitcoin as an asset class are specious and without merit.

We think a much closer analogy to what Bitcoin truly is, can be seen in the work of art, a digital collage, “Everydays: The First 5000 Days” by Beeple (Mike Winklemann). This sold for $69m in March and garnered widespread attention for a few unusual features.

Now you can shake your head at the madness of it all, but how much is a work of art “worth”? If a piece by Damien Hirst is worth £50m, then why not a piece by Beeple? If you argue that the Damian Hirst piece is not worth £1m you could mount a strong case, but it is worth what the buyer was willing to pay and there are few objective points to reference. It is not as if the piece has an earnings stream or cashflow you could value. Its value is purely speculative and it is high because of its perceived artistic merit, the hype around the artist and the newness of the concept of NFT’s and the scarcity of the item.

Many of these features can be seen in Bitcoin and understanding perceptions of Bitcoin is easier when you view it through the prism of being a work of art rather than an investment asset. 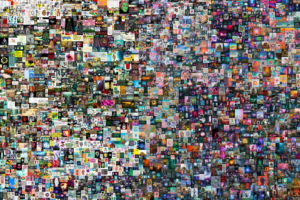 Bitcoin may continue to rise, it may crash to the ground. That will be determined by the collective efforts of those that have propelled it to these heights. However, it is not an investment and we will not consider it as such for our clients.