The Phones4U story provides an irresistible opportunity to discuss CSR, which has also been in the news recently. It is an ideal counterpoint to the Phones4U story and has been one of our preferred investments.

CSR (formerly Cambridge Silicon Radio) was one of the great U.K. technology success stories. Founded in 1998, it quickly became one of the leading pioneers of bluetooth semiconductor chip technology, which enables data to be sent and exchanged over short distances between fixed and mobile devices. It operates a “fabless” model, similar to ARM, whereby it designs and licenses intellectual property rather than manufacturing.

CSR’s largest revenue stream was the design of bluetooth chips for mobile phones. However, by 2011 CSR was struggling. It had, like Nokia, in many ways missed the smartphone revolution and was rapidly losing ground to competitors who were supplying Apple and Samsung, the new titans of the industry.

It is received wisdom in the technology investing space that once a company has slipped behind in terms of its relevance it is notoriously difficult to catch up – most firms never do. In 2011 the general market sentiment was that CSR had lost its way and was in irreversible decline.

CSR had some other lines of business such as chips for headphones and in-car navigation devices, where it was still a market leader, but these showed insufficient growth to make up for the decline in the mobile chip business. It was continuing to research and design a new chipset to help it catch up in mobile, but there was no guarantee of success or that it would still not be behind the curve compared to its competitors, and the profitability of the firm collapsed.

The shares did likewise falling from over 500p in early 2010 to as low as 154p in November 2011. The market value of the company at this time was approximately $500m (we use dollars as this was the company’s reporting currency given it sold its products globally rather than solely the U.K).

In its third quarter results released on 26th October 2011 just a few days before the share price reached its nadir, we can ascertain the following headlines:

This was when we took a closer look and started buying shares. A few things were immediately attractive. Most significantly the company had net cash of $290m and remained profitable. This cash was not being eroded and represented 60% of the entire market capitalisation of the company. Revenues had actually risen by 10% due to an acquisition and gross margins (an important indicator of quality) were above 50%.

The balance sheet strength of the business and the ongoing profitability means that despite the challenges the business had time and breathing room to restructure. It was not exposed to “event risk” of the sort that killed Phones4U.

Another operating metric we look for is the research and development (R&D) expenditure for two main reasons.

Firstly, because CSR was a pioneer and retained deep technical expertise in connecting devices. Our view was that this expenditure was highly unlikely to be valueless. Intellectual property is generally badly valued by stock markets. As an example Google paid $12.5bn in 2011 for Motorola Mobiles (another player who had misread the smartphone boom) and immediately sold the smartphone business for $2.9bn, leaving some commentators scratching their heads as to what it had exactly bought. What Google wanted was the IP, the patents; partially to defend itself against patent trolls but also to give it a depth of technical expertise it required to develop its own range of smartphones operating on the Android operating system.

Secondly, R&D spending at CSR was largely discretionary. Some technology firms describe routine manufacturing maintenance as R&D so you always have to look closely but, as CSR was not a manufacturer, if the expenditure was yielding insufficient results it could be cut swiftly.

These were particularly relevant factors because of the sheer size of the R&D expenditure. In that quarter CSR spent $62m on R&D, an annual run rate of around $240m, all of which was being completely written off against profits.

CSR, if you strip out the cash, was being valued at less than one year’s R&D spend. The headline figures may look bad, but there was a deep value story beneath them. The situation at the time, in our view, offered probably undervalued IP, huge technological optionality from the R&D and significant protection from the balance sheet and the operating model of the firm.

The stock market analysts continued to focus on the declining revenue and profitability story.

“CSR only manages to get cheaper. There is still downside to the valuation multiple and to forecasts, in our view. Competitive risks and exposure to lower-growth markets do not mark it out as a sure-fire 2012 rebound stock. CSR does not have the budget or technology portfolio in our view to regain share and drive margin recovery. Sell” Peel Hunt November 2011

The much maligned mobile chip unit was subsequently sold for $310m in cash in July 2012. More than the entire company was valued at.

The remaining operating businesses have continued their gradual transition and on 28th August CSR announced it had received an approach from Microchip technology.

From a low of 154p the shares stand at 765p. If the takeover talks are successfully concluded we would expect the cash offer to be above 900p. As we mention in an earlier piece in this review, while stock markets may be fully priced, there are always opportunities. 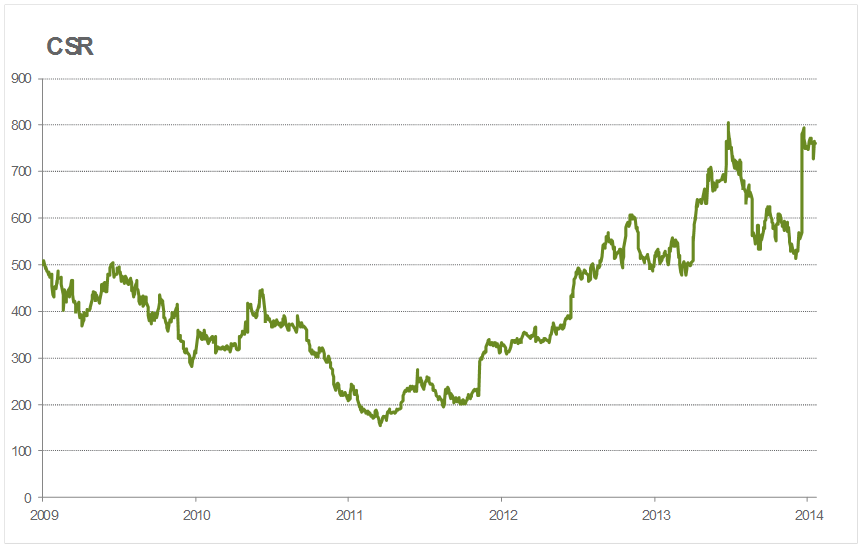