The price of oil has plunged in a manner no commentators were predicting at the start of this year. An initial conclusion should be to reinforce your scepticism of solemn analysts claiming to predict the future with precision. 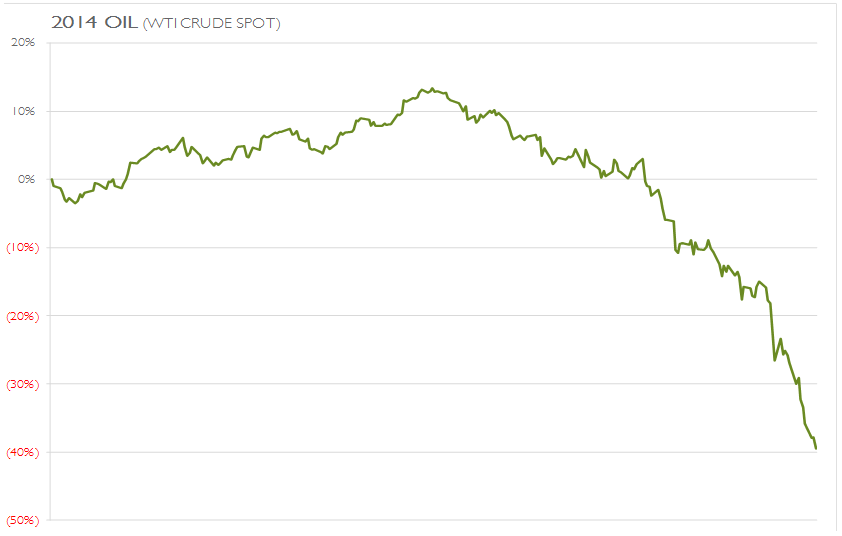 The cause of the fall can be simply ascribed to excess supply and, because of sluggish global growth, weak demand.

What is more interesting are the consequences of the falls in three areas: global economic growth, oil industry economics and “State capitalism”.

It used to be considered axiomatic that falling energy prices are “A Good Thing”. Lower prices reduce costs for most businesses and individuals. If you are an oil exporting nation then the inverse is the case. What has changed is that the positioning of the players on the spectrum from good to bad has moved markedly – there are big winners and big losers in this cycle.

For countries like Russia or Venezuela the impact is magnified by the extent of the reliance on energy exports and the consequence of such a reliance: cronyism and the hollowing out of the state. Paradoxically resource rich nations tend to grow slower than other poor countries. The basic pattern is that, after striking oil, dollar denominated revenues flood into the country driving up the local currency. This is bad for most non-oil sectors and makes agriculture and manufacturing less internationally competitive.  A more corrosive influence is the impact of the wealth generated on countries that do not have strong institutions. Absent vibrant democracy, independent judiciaries, a robust legal system and a free press, the wealth is too easily captured by a narrow elite who further diminish the institutions by corrupting these checks and balances.

This pattern is not universal but the outcome usually is: the oil becomes the only industry in town. When the price of oil falls there are no other industries to insulate the economy from the pain. Russia is clearly in a traumatised position with the sanctions applying further pressure and Venezuela is unlikely to make it through the first six months of 2015 without defaulting.

Reciprocally there are some countries that will disproportionately benefit and we would highlight India and Indonesia. Fuel subsidies compete with other areas of governmental spending, as an example governments in Indonesia, Pakistan and Venezuela are spending twice as much on fossil fuel subsidies as they are on public health. Other economies have higher fuel subsidies in place though they are generally energy exporters. Where India and Indonesia are different is that they have the political desire and will to reduce them and the fall in energy prices provides them with an almost costless opportunity to end this wasteful practise. 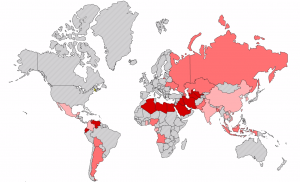 In the middle-ground are the major oil exporters, who face sharply diminished revenues but have ample balance sheets, and the US which is close to neutral in terms of energy extraction but where much of the recent growth in employment has been the result of huge capital investment in the shale industry whose economics have gone from dubious to catastrophic.

For China the falling oil prices will diminish some of the pressures on its slowing economy. It is worth noting that lower oil prices disproportionately affects countries with an ability and desire to increase geo-political risks (nebulous as they are). Falling oil is not a one way bet.

The seven (non state-controlled) oil majors (Shell, BP, Exxon, Chevron, Total, ENI and Statoil) ran a collective deficit last year of $55bn. They generated $207bn of operating cash flow but invested $209bn in capital expenditure and paid out $53bn in dividends. Over the past four years these companies have sold $150bn of assets. The consequence of dividends being cut is that management teams get fired. As companies are not generating sufficient cashflows to fund both dividends and the huge capex required by modern exploration they have chosen to eat themselves; cutting CAPEX and selling assets in order to keep the dividends flowing at least for the short term – ultimately this strategy ends up in zero dividends.

We have long considered that the data from shale never matched the hype: the capital intensity was high and the well productivity was poor and degraded more rapidly than expected. At $60 a barrel the debate is over. We expect to see many projects mothballed and for the major players and their banks to write down their assets. On the 19th December Comstock Resources announced plans to suspend all drilling in its Eagle Ford shale properties. It was a small player in the shale industry but Eagle Ford was supposed to be the best and most profitable field. Civeo, which provides temporary housing for oilfield workers, has just slashed its US workforce by 45% and warned that revenue could fall by 1/3rd as oil producers cut costs.

Energy CAPEX accounted for 41% of total US CAPEX in 2014 and for the majority of jobs created. This CAPEX will be scaled back by a significant margin in 2015 and the industry will act as a major drag on US growth and job creation.

Following the financial crisis a new form of economic model was promoted especially in emerging markets and China whereby the state would provide favoured access to energy and mineral resources to local champions: think Petrobras in Brazil, Rosneft in Russia and PetroChina in China.

“It’s in our continents [Africa and South America], where enough natural, political and historic resources are found…to save the planet from the chaos it’s been driven towards by the capitalist system”

Hugo Chavez, shortly before his death in February 2013

This new and improved capitalism was intended to provide stability, growth and greater equality. The state would maintain a large majority equity position and private investors were invited to provide debt financing. It was viewed that opening up their resource assets to global competition would lead to unnecessary profits for the oil and resource majors. Boards of these state owned enterprises would be large, well paid and often include politicians in order to better serve the needs of their many stakeholders. 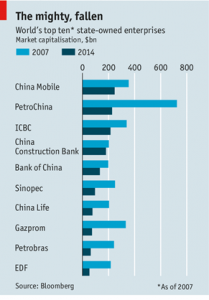 This approach is certainly contrary to the extensive evidence from nationalised industries throughout Europe and begs the question of whether these people ever drove the hateful Austin Allegro from that paragon of “State capitalism”, British Leyland.

As was readily predictable capital discipline dissipated as the companies lost the oversight and powers of intervention from the shareholders. Vanity projects and other misallocations of capital (along with outright fraud in some cases) swelled balance sheets and depressed returns. Bond yields are rising in line with default risks and rather than heralding an innovation in management these state owned enterprises are facing existential problems with falling resource prices and large dollar denominated debts.

The new model has not proved successful and has diminished the economies of its proponents.