The summer saw markets extend the pre-existing moribund state into out and out docility. There is a growing acceptance among financial institutions that central banks will apply the sedative of monetary policy should any instability emerge. They have at their disposal the capacity to print money and the political authority to do so. The last appearance of volatility was in May 2013 with what has been referred to as the “Taper Tantrum”, when the Federal Reserve announced it would begin tapering back its $70b per month bond buying programme.

Since then central bankers have retreated into their gnomic shells and the accommodation seems to be thus: as long as GDP keeps ticking along slowly upwards and the financial system gradually heals itself then QE can be eased and the possibility of minor rises in interest rates will be accepted by markets without causing panic.

Growing geo-political risks in Ukraine and Iraq have been absorbed with barely a murmur. But our increasing contention is that this blanket easement is intensifying structural problems that are causing deflationary pressures and slowing economic growth. Firstly we should be clear that there is virtually no global GDP growth at the moment.

George Osbourne trumpeted the “major milestone” that the UK economy is now ahead of its pre-crisis peak. Ed Balls, his Labour counterpart, insists that standards of living have not been rising. They are both right (see graph below). GDP has reached its historic peak but per capita GDP remains 6% below. Standards of living have not been rising, there are just more of us – immigration has been the principal driver of UK GDP growth, but this is a zero-sum-gain situation. Immigrants to the UK boosting our economy equals emigrants from other countries draining their economies. Optically it is good for the UK but no substitute for organic growth. 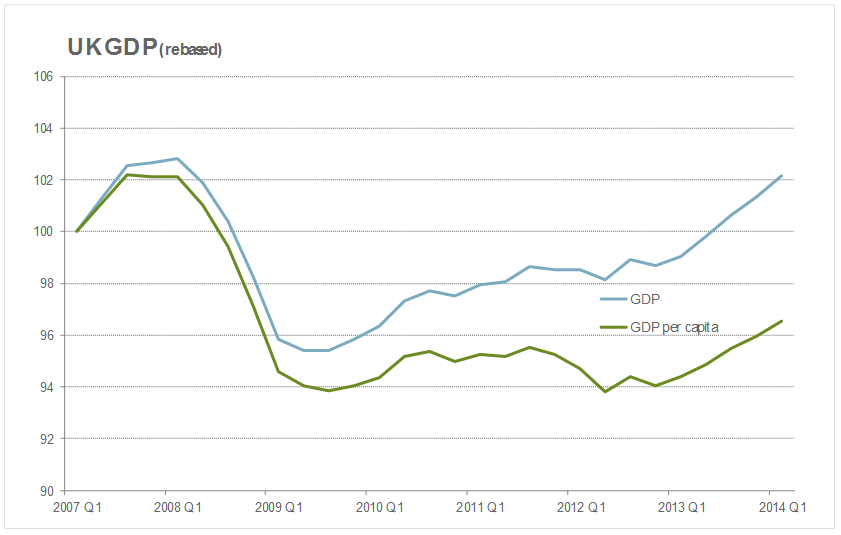 Europe suffers pervasive deflation that even a weakening currency may not counter. Mario Draghi is systematically acquiring the political support for monetary intervention and we believe that this is likely before the end of 2014.

Even the US stock market has been fuelled not by organic growth but by financial intervention. Over $500bn of shares were bought back in 2013 and $338bn has been bought back so far in 2014. Seven of the largest buyers of their own shares spent more doing so than they earned in profits. Earnings per share metrics are being manipulated upwards by an unsustainable wall of money. The breadth of the US stock market recovery is also a concern. Just under half of all Nasdaq listed stocks are down at least 20% from their highs. The stock market has been driven upwards by borrowing to eat its own equity, since Q1 2008 there has been no net revenue growth in the S&P500. The money will run out soon enough and we are back to zero/negative economic growth.

We are sellers of economic certainty. Economies are like organisms: they are hard to analyse and are reflexive. Quantitative easing has been the greatest economic experiment in the history of money. There is no precedent and no manual so economists predicting certain outcomes should be listened to with scepticism. As Prof. George Feiger writes in the following article,

“Financial/economic decisions about the future go wrong because the future cannot be predicted perfectly.”

Our major concern is that the meagre economic growth we have experienced has been fuelled by quantitative easing, but is this growth healthy or cancerous? Is the growth coming from the misallocation of capital which, in a capital constrained world, will further slow future economic growth? Additionally when the pounds and dollars start to be hoovered back up by the respective central banks is this likely to further depress growth?

All in all you can see why it is tempting to take the central bank valium and ease back into slumber. It may well be the best investment strategy in the short term, but that does not mean that there is not work to be done.

Our focus has been in three main areas:

1) As volatility has diminished and the search for yield has gathered pace, credit spreads have narrowed. This is the premium that companies have to pay over gilt yields in order to borrow money. The consequence is that even junk debt has been chased to prices that seem unsustainable particularly when interest rates start to rise. The Phones4U saga also demonstrates that the major financial organisations and debt rating agencies cannot be relied upon to make judicious decisions. We have been improving the credit quality and shortening the duration of our fixed interest holdings and transitioning towards floating rate debt instruments.

2) There is growing evidence that UK banks, having lost 2/3rds of their value as a sector relative to the wider market over the financial crisis, are starting to display valuation opportunities. Loan loss provisions and impairments are declining and the structural margin in borrowing at nothing and lending at say 6% is huge. [We will cover this in detail in the next review]

It is impossible to know when the opiates fade and volatility returns, but return it will, and preparations can be made.